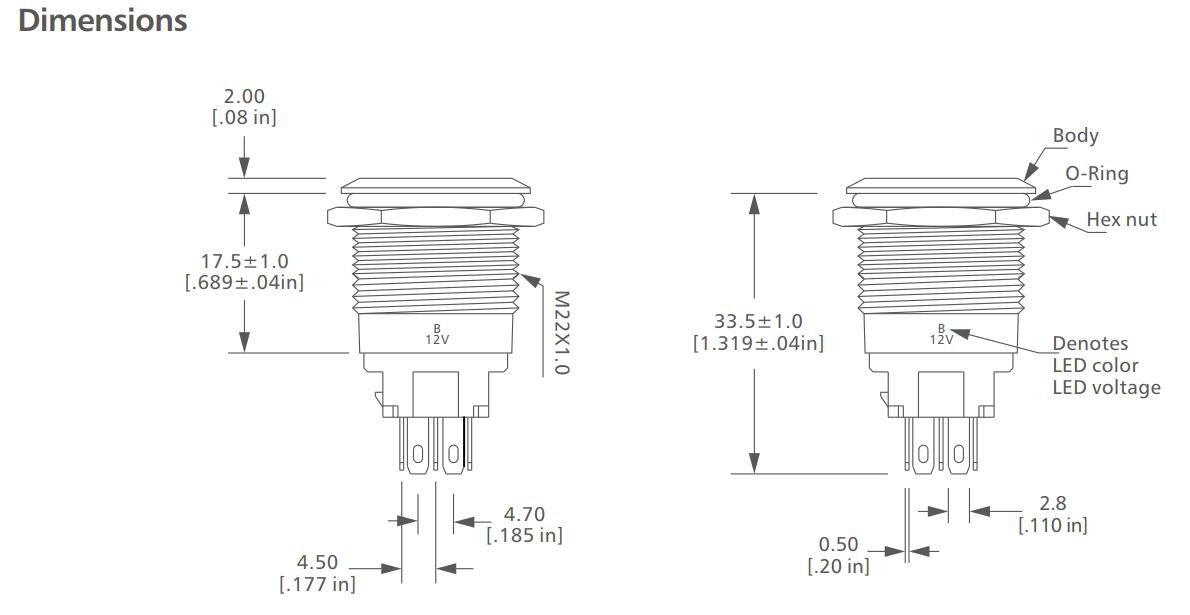 It has a maximum switch rating of 3A/250VAC, and a bushing diameter of 22 millimeters, panel cutout—ideal for a surface with a panel thickness of around 1 to 10 millimeters.

A flat head or a raised head are your two options for the L22T Series’ actuator. With a flat head, you can expect around 2 millimeter-sized button, while a raised head will measure around 3.90 millimeters.

If you have a specific color requirement, you may choose from Langir’s common list of LED colors including white, yellow, red, green, and blue, or a combination of blue, green, and red.

Langir always adheres to the highest standard. You can expect that the L22T Series will perform well even when placed outdoors where heavy use and inconsistent weather conditions may affect the switch. This is attributed to its ingress protection rating of IP65 and impact protection rating of IK09.

Although it has a high protection rating, it is still best to install this series in an environment where the temperature runs between -20 °C and 55 °C.

Meanwhile, when it comes to the technical data of the L22T Series, the following may come helpful.

If you are wondering how the L22T Series may react to current flow, especially if it touchesng another contact, it may be helpful to know thseries’ss’ contact and insulation resistance. It has a contact resistance of fifty milliohms at minimum, and an insulation resistance of one thousand milliohms at maximum. Additionally, in measuring the electrical strength of the L22T Series’ insulating material, it is best to know its dielectric strength which is at 2000VAC.

Without the flow of full current, the L22T Series can last up to 2 million cycles. This is shortened to up to 100 thousand cycles only when loaded with current.

If all these features meet your needs, then look no further than Langir’s L22T Series Momentary 2NO2NC Anti Vandal Switch.